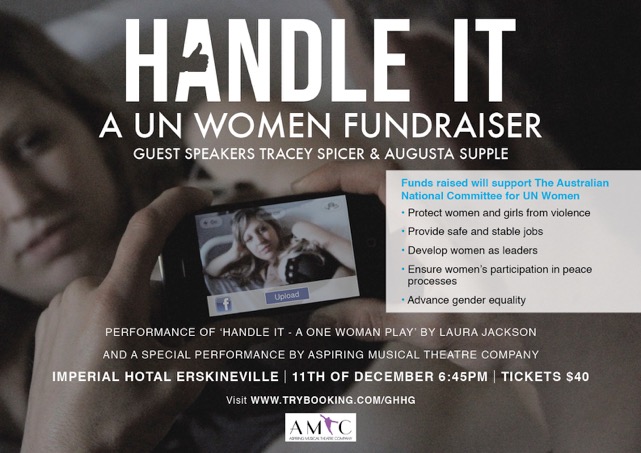 Handle It – A One Woman Play

As relationships between young women and men are impacted more than ever before by the expanding world of the internet, six “Gen-Y” characters battle with evolving ideas of relationships and sexuality.

Are we becoming desensitised?

Are we just bodies?

The real question is: Can we handle it?

The critically acclaimed, feminist work, Handle It – A One Woman Play addresses the incredibly important but often avoided topics of domestic violence, the impact of social media on the privacy of women, rape, and victim-blaming. Handle It has received much positive community feedback, with many people recommending it be shown in schools. We believe that starting a dialogue about these topics can be hard, but that is also something that needs to be shared, as making people more aware of issues that a great deal of society faces, will lead to more acceptance and a greater willingness to change the world we live in.

One night fundraiser for United Nations Women, at the Imperial Hotel, Erskineville, on the 11th of December.

The night will open with two wonderful guest speakers, journalist Tracy Spicer (who gave a Ted Talk on female beauty standards called “The Lady Stripped Bare”) and feminist writer Augusta Supple, who is active on her blog, Facebook and Twitter. This event will also feature Handle It, a critically acclaimed one-woman play written by Laura Jackson, which returns to Sydney after a sold out season as part of the Sydney Fringe. The evening will be concluded with drinks and musical entertainment by Aspiring Musical Theatre Company.

Tickets are $40 and you can book at TryBooking and invite your friends to the event on Facebook.

Funds raised from this event will go to support UN Women’s Beijing20 Campaign & their efforts, projects and advances in policy.

Sydney Counsellor, Soul-Centred Life-Coach and Psychotherapist Jodie Gale, is a leading specialist in women’s emotional, psychological and spiritual health and well-being. She has a private counselling, life-coaching and psychotherapy practice in Manly and Allambie Heights on the Northern Beaches of Sydney. Jodie is also available for Private Practice Consultations for Therapists.